The Cardo Maximus route has been identified as the road that connected the north and south of the city in the Roman division of the city, which coincides exactly with the part of Seville that we want to explore.

Thanks to this route through Seville, we have the opportunity to visit a series of very interesting Roman and Mulsuman archaeological remains, which will allow us to speak as never before of Seville's past through material evidence.

We will continue to Feria Street to reach the Church of San Juan de la Palma, a recognized and very emblematic place of the city. We will make a stop at the Palace of the Marquises of Algaba and the Church of Omnium Sanctorum, representations of the Mudejar past of the city during its growth in the Middle Ages.

We will cross the Macarena neighborhood to reach its Basilica, the occasion to see the most famous Virgin of the city, the city wall and one of the last medieval gates of the hispalis population.

Alternating history and legend, we will learn the secrets and intrahistory of the place.

The route will continue through the old Cardo Máximo of the city, San Luis Street, where we will cross the Plaza del Pumarejo until we reach the Mudejar church of Santa Marina and the curiosities surrounding the temple and its surroundings.

From there, we will continue to the neighboring church of San Luis de los Franceses, a baroque jewel of Seville, also located on this famous street. We also contemplate its sumptuous embossed interior as we walk through its rooms.

After the visit to the church, we went to the church of San Marcos and contemplated the charming surroundings. The route allows us to return to the city center.

🛈 The route may change its itinerary depending on changes in opening hours and days. Most of the monuments offer free access, but some of them can be paid at the time of the visit.

At the end of this tour, we will arrive at the Palacio de Dueñas, where we will culminate our visit inside the palace, where we will walk through its gardens and all its different rooms.

Stops on the Cardo Máximo Route:

More activities to do after the route 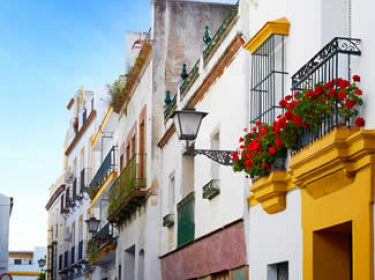